Up Guide - Luxury Our Way

Sondre Sommerfelt in collaboration with Up Norway

This Up Guide is written by insider Sondre Sommerfelt; A cosmopolitan anthropologist, travel writer and cultural entrepreneur, for Up Norway.

Sondre is an Oslo-based travel writer, sailor, skier and cultural critic. He loves the outdoors and city life (who doesn’t) and knows everything that moves on Norway’s cultural and music scene. Enjoy his humorous - yet useful - guides to Norway.

‘Hytte til hytte’ (cabin to cabin) in the great outdoors

Taking in the natural beauty that Norway has to offer, Up Norway can offer you a smörgåsbord of truly unique hiking experiences. Up here, lavish spending is no proof of expertise, and the experienced traveller to Norway knows that splendour can be found off the beaten track and outside of peak season. That does not mean travellers up north should be parsimonious, of course. The smart traveller may spend some extra kroners on a dinner out of the ordinary, a great journey of far out fishing, sailing or skiing - or other extravagant and exotic experiences – and always consider it money well invested. That being said, a concept worth trying is ‘Hytte til hytte’ – ‘cabin to cabin’.

No less vigorous than their Viking ancestors, Norwegians retain a deep closeness for the land and great love for the outdoors

A strong hiking tradition has given rise to an extensive network of trails and footpaths, as well as spectacular hideaways built for summer backpackers and winter skiers. This concept is called simply ‘hytte til hytte’ – ‘cabin to cabin’. Run by the Norwegian Trekking Association, Norway is home to the largest and best public cabin system in the world, in some of the last stretches of true wilderness left in Europe, a way of life for locals and a novelty for visitors.

©The Norwegian Mountains (Photo: Up Norway) 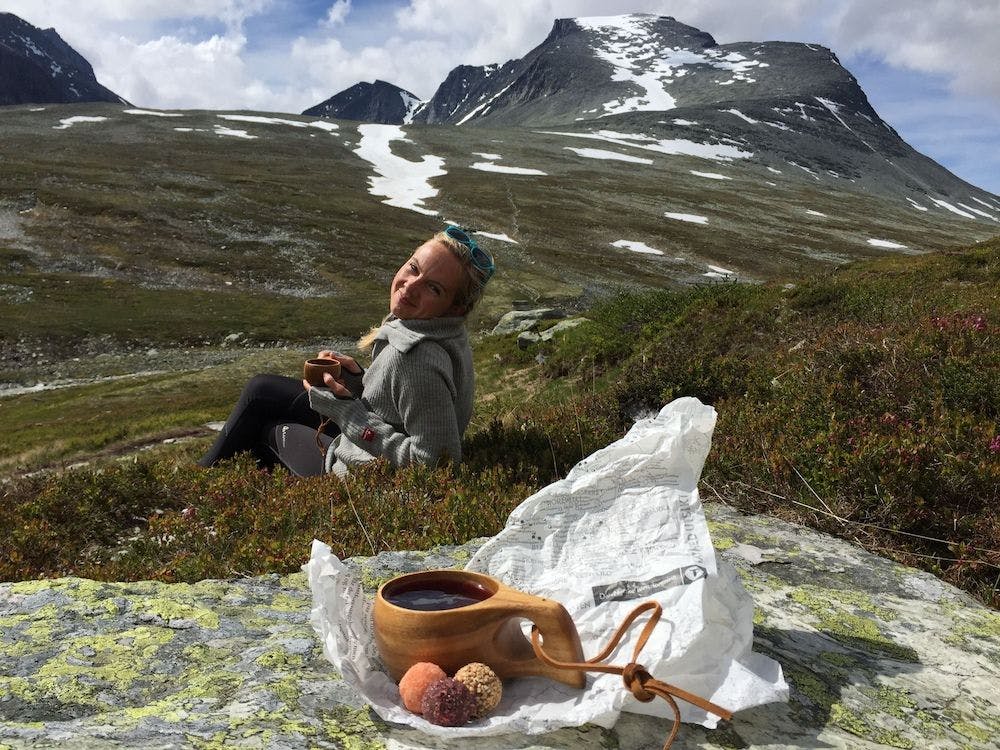 The vast route network is developed in part from older thoroughfares and local footpaths as these mountains have been tackled by the Norwegians since the first Norse woman and man followed the reindeer when the ice cap retracted ten thousand years ago. With such an old and strong tradition of hiking in this country, you could also call this gigantic trail system, in part a question of supply and demand, in response to the needs of trekkers, as ensured by their ‘public right of access’. Yes, this law of the land is important for a simple Norwegian - the right to roam if you want to.

In Norway everyone has the unrestricted right of free access in the countryside, including the national parks. So in a way, the trails serve both to guide trekkers, on foot or on skis, and to protect plant and animal life by serving as limited channels for human foot traffic in the outdoors.

All trekking routes are clearly marked at intervals short enough to see from one mark to the next, even in rain, fog or the occasional blistering storm. They are of two types: summer hiking trails and winter cross-country skiing tracks.

It is custom for all travellers to follow the traditional nine-point mountain code ‘Fjellvettreglene’ (Ask a local what they are before you go, we all know them by heart). This set of rules from 1967 was in 2014 supplemented with ‘Fjellsjekkereglene’ – another nine-point guide intended to ‘help people find love in the mountains’. If you are single, remember to wear a green beanie.

The rustic cabins are a pleasure to stay in and make Norway’s wide-open terrain far more accessible. Equipped with firewood, gas, food and kitchenware, they have a unique charm you will not find in a five star hotel. And unlike any glittering hotels, you can hang around the lobby in your socks and long johns. Some of the cabins are staffed, but most are self-catering. Some of them even come with a supply of provisions. Most self-service cabins have solar panels for their led lamps, but no running water. But, the cabins are usually located very close to a river from which buckets may be filled. Yes, it is like Walden, and it is time to find your inner Henry David Thoreau. Before leaving a self-service cabin, it is considered good etiquette to carry in firewood, do the dishes, clean the floor and lock the door behind you before you head into yet another day of wilderness fun.

What is Eco-Luxury/ Sustainable Luxury?

Luxury at Up Norway is focused on the beauty of connection – to the people you will meet, the companions you travel with, to yourself and to the nature around you. We provide off-beat, rare, unique and visceral experiences for our guests. We tailor our journeys elegantly, by using expertise across various fields that give you the attention to detail that aim to make your experience seamless and transformative.

What do we mean by Sustainable travel?

Sustainability has different meanings — for us as a company it's about making choices that maximise positive impact in each and every journey we sell. The UN sustainable development goal we truly connect with and strive to contribute to is 11.4: Strengthen efforts to+protect and safeguard the world’s cultural and natural heritage. We design our journeys with the goal of sending our guests home enriched and insipred to take concrete action to make positive change in themselves and the world around them.

What is Eco/ Regenerative travel in the Norwegian context?

Ecological and regenerative travel quite explicitly means to keep defining, refining and designing travel experiences that can use the economic system to integrate the ecology within nature with the culture of travel. Striving towards an impact that helps regenerate local economies and conserve the environment. In the Norwegian context, this implies working with local communities that will benefit from economic development, preserving through showcasing their cultural heritage and focusing on the environmental impact that protects the ecologies of our diverse and wild nature.

What sustainability certification do you have?

Up Norway is very proud to be a certified B Corporation, the first travel company in Norway to achieve this. With the highest level of third-party verified social and environmental performance, public transparency, and legal accountability to balance profit and purpose, these businesses support positive impact for employees, the communities that they work in, towards an ecologically minded future. As of June 2022, we are also still the only Norwegian travel company offering journeys in Norway to carry Travelife certification, a recognition of our long-term sustainability efforts and our corporate social responsibility leadership within travel.

Let us inspire you with news and offers you won’t want to miss.

Let us inspire you with news and offers you won’t want to miss.